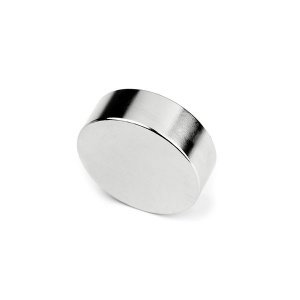 In this article, we’ll be talking about n52 magnets. If you’re just a little interested in magnets, you’ve probably heard about the type of magnets called Neodymium, including the n52, which is the one we’re gonna discuss.

Is mentioned before, an n52 magnet is the strongest member of the rare earth magnet family, and the most powerful permanent magnet currently available in the world. The rare earth family includes, as the name indicates, magnets that are made from different rare earth elements.

Neodymium magnets are also called NdFeB or NIB magnets. The reason for the names is the way they’re composed. Mainly, they’re composed of neodymium, iron, and boron. Neodymium magnets, including the n52 magnet, are a fairly new invention, which quite recently became affordable for everyday use. E.g. this small power magnet available for 1,20 EUR.

All neodymium magnets I rated with an “N” following with either a “35”, “40”, “42”, “45”, “48”, “50” or “52”. The number is an expression that determines the maximum weight of which they can be magnetized. The number is, besides an indicator of the magnets strength, an expression of the strength measured in Megagauss Oersted.

“52” is, as mentioned, the highest number of the N rating, which also means that it is the strongest.

Use of neodymium magnets

Neodymium magnets are a relatively new invention but have already replaced both Alnico and ferrite magnets in many applications of modern technology. It’s mostly used in applications, where a strong and permanent magnet is needed.

The neodymium is frequently used because their massive strength allows fabricants to use smaller and lighter magnets for many different applications. To mention a few, neodymium magnets are used for:

The impressive strength of the neodymium magnets has also lead to some new applications, where magnets are not seen before. For example as jewelry clasps and magnetic building sets. Neodymium magnets have been used as a part of the closing mechanism of some parachute equipment.

How much weight can an n52 magnet carry?

There are different ways to determine the strength of a magnet, but it all depends on how you define strength. The most common measurements are pulled force and strength of the magnetic field.

Pull force is the measurement that determines how much power you have to use in order to remove the magnet from the object. A surface made of steel, for example. You usually measure this type of strength in either pounds, kilos or newtons.

Now that we have covered what aa n52 magnet is, what it can be used for, and how to determine the strength of a magnet, let us take it back a notch and discuss how magnets even work.

The best way to answer it is for yourself to do a minor experiment. Try taking a magnet and some needles (the kind you use for sewing), and hold the needles against the magnet. The stronger the magnet is, the better the experiment will work.

Now, when you remove the needles, you will actually have created a magnet in the form of each tiny needle. For example, if you touch the needles with a screwdriver, the needles will stick to it.

Needles are made of steel, and steel is made of billions of atoms, which each have a tiny bit of magnet within it. The atoms the steel is made of will stick together in domains, which is a kind of group.

The atoms within a domain will all point in the same direction, making the group of atoms behave just like a very small magnet, kinda like one used for toys. This is also why the needle within a compass always will point towards the north because it automatically will line itself with the magnetic field of the earth.

Since you’re still with us, I guess you have an interest in magnetics and magnets, just like us. Therefore, we have sampled 6 interesting facts about magnets, which we believe that every magnetic enthusiast will appreciate. Here they are:

The difference between permanent and temporary magnets

A neodymium magnet, including the n52 magnet, is the type called permanent magnet. But, there is also a different type of magnets called temporary magnets. The difference between the two types of magnets lies within their atomic structure.

This explanation may not make much sense to you, so let's try to put it in a more understandable perspective.

A temporary magnet is like the ones you may have seen in a scrapyard or in a movie. You know, the who picks up cars and smashes them. This type of magnet can be turned on and off, where the magnetism only will apply when you want it to. This is very useful on a scrapyard.

Related products - What Is a n52 Magnet?